Every day, over 700,000 vehicles travel on the New Jersey Turnpike, the largest toll road in the state. When a bus or other large vehicle crashes on the Turnpike, the damages can be immense. If you have been affected by a bus accident there, here are some things that you should know to help protect yourself and your rights.

Many bus lines regularly use the Turnpike

In addition to Megabus, the bus companies that service the Turnpike include Greyhound, NJ Transit, Peter Pan, and Trailways, among others. Unfortunately, many of them have been in several accidents there over the past few years. In 2019, an Alliance bus overturned, injuring 18 people, and in the previous year, a charter bus rear-ended a big rig, resulting in more than a dozen people being injured.

A deadly Megabus crash on the Turnpike on Aug. 9, 2022, has drawn attention to the danger posed by bus accidents on major New Jersey roadways. The bus, en route from New York to Philadelphia, crashed at the entrance ramp to the Thomas Edison Service Area in Woodbridge, flipping over and taking the life of one of the passengers. Five more were injured, including the driver of the bus, after a collision with a pickup truck.

These types of bus crashes can be devastating to the victims and their families. If you have been impacted by a bus crash, an experienced personal injury accident lawyer can work with you to help you seek compensation for the damages you have suffered. It can be important to consult with a lawyer soon after a crash to ensure that you do not accept an inadequate settlement offer.

Causes of Bus Accidents on the New Jersey Turnpike

The cause of the August bus crash has not yet been established, although victims are already working to ensure that the evidence is properly preserved and investigated. While there were thunderstorms in the area during the accident, poor weather in and of itself is rarely the cause of a major bus collision like this one.

Many things can cause serious bus accidents. These accidents can be so devastating because of the number of passengers at any given time as well as the large size and weight of the bus, which can make damage to other vehicles even more severe.

It is possible for vehicles to end up getting into a collision due to external factors, such as an accident ahead blocking the road or unclear signals. However, most bus accidents, like other crashes, involve some form of negligence. For example, a bus driver may drive too quickly, violate traffic laws or speed to prevent another vehicle from merging. In addition, a bus driver may run afoul of another negligent driver on the road who does not heed proper distancing rules, attempts to cut off the bus, or otherwise engages in dangerous or negligent driving behavior.

Some of the common causes of collisions on the Turnpike include: 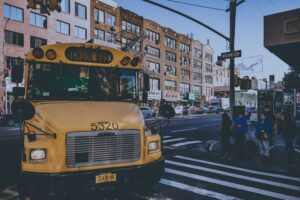 Distracted driving is a major problem throughout the country. Of course, people are warned to avoid distractions, which can include such things as eating while driving and using a cellphone while behind the wheel. However, even for experienced bus drivers, it can pose a real problem. They can be distracted by passengers on the bus, paperwork for the bus company, incoming radio traffic and electronic devices.

Another major issue for bus drivers, is fatigued driving. This may be a particular concern on overnight bus routes. Studies show that the effect of driving while overly fatigued can be similar to drunk or drugged driving in some cases. If a bus driver is driving on too few hours of sleep or with not enough hours away from the wheel, the results can be devastating.

Mechanical failure and poor maintenance are additional reasons for bus crashes. Large passenger buses require ongoing and extended maintenance. For example, poorly-maintained brakes may make it difficult or impossible for a driver to stop properly, especially if an emergency or slow-moving vehicle appears ahead. An improperly maintained or defective bus may make it nearly impossible for even a cautious and well-trained bus driver to avoid a dangerous accident.

Who Is Responsible for Bus Accidents on the New Jersey Turnpike?

Bus crashes in New Jersey are particularly dangerous because of the size and weight of the vehicle as well as the number of passengers on board. A typical NJ Transit bus sits up to 50 people, although some NJ Transit articulated buses may carry up to 100 people. Many NJ Transit buses are more common on local roads around the state. Charter and other buses also hold similar numbers of passengers. Megabuses are often double-decker buses, so while they are the same length as an NJ Transit bus, they can carry up to 70 people at a time.

Double-decker buses are safe as they are specially designed to reduce the danger of a rollover or tip due to their unique shape and size. However, the people at the top of a Megabus may be in a particularly risky situation when the bus accident is severe enough that a rollover takes place. The lighter top frame of the bus may offer less protection in some cases, especially if there is a complete rollover of the Megabus.

There could be multiple parties responsible for the damages caused by a New Jersey Turnpike bus accident depending on who was negligent leading up to the crash. Some of those who could be responsible for a bus crash include:

In most cases, bus companies are common carriers, which means that they provide service to the public in exchange for a fee of some kind. Common carriers have a responsibility to show a duty of care to their passengers, including following traffic laws and maintaining their fleet of buses responsibly.

If You Are Injured in a New Jersey Bus Crash

If you or your family members are injured in a bus accident on the New Jersey Turnpike, you can take action to protect yourself. A personal injury lawyer can help you defend your rights, including reviewing the police and witness reports, going to court to preserve or reveal evidence, researching surveillance footage, and gathering a complete picture of the cause of the accident. Your attorney can work with you to ensure your injuries are properly documented and recorded and handle all communication with the bus company’s lawyers and insurance companies.

At RAM Law, our personal injury attorneys are experienced in dealing with truck and bus accidents on the New Jersey roadways. If you have been affected by a bus crash, call our New Brunswick and Somerville offices at 732-394-1549, or use our online contact form to set up an initial consultation.