Awards for Truck Accident Claims Are at Astounding Levels

The increasing willingness of juries and insurance adjusters to award large amounts of damages in trucking accident cases has become evident by the number of cases in the last decade that have set records. Even as the U.S. Department of Transportation reports that overall incidents are down, jury awards can be tens of millions of dollars. If you’re worried about whether you’ll get a fair shake with your case, you may be surprised to learn just how valuable truck accident attorneys might be to your cause.

FTS International, an oilfield services firm that operates a fleet of trucks, was ordered by a jury in July 2018 to pay up to the tune of $101 million dollars, setting a new bar for the largest settlement. With the exception of a $50,000 penalty levied against the driver, the entire judgment is expected to be paid by the company.

The incident in question occurred in Texas, and it involved the truck driver plowing into the back of a pickup. There were no fatalities in the incident, but the pickup truck’s operator suffered back and neck injuries severe enough to keep him from ever working again.

At first glance, the case sounds very typical of what we might expect from truck accident claims. What angered the jury enough to award a record judgment? The driver of the rig that caused the accident had falsified multiple documents certifying his safety record, and the company would have been able to avoid hiring him if they had spent a mere $20 to have a third party conduct a quick check of his driving record; not doing so was actually in violation of their own internal standards. 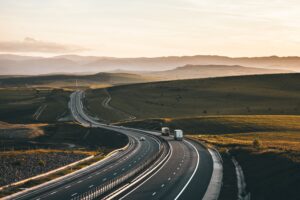 Bad Weather and a Bad Choice

The FTSI verdict, amazingly enough, came only two months after the previous record-setting truck accident case, also from Texas, had led to a jury judgment of more than $89 million. A driver for Werner Enterprises had been operating a rig in conditions that the jury judged to be unsafe. Instead of pulling off the road, he continued driving in conditions with freezing rain, low visibility and black ice. The driver lost control of the vehicle and struck a pickup, killing a 7-year-old and leaving a 12-year-old with brain damage. Two others were also injured in the incident.

The jury said that the Werner training and safety rules were not sufficient to prevent an avoidable incident. The trucking company is presently appealing the judgment.

A truck operated by a driver for Total Transportation, a firm based in Mississippi, struck a compact car along I-16 in Georgia. Traffic had already been slowed by a previous crash when the truck struck an SUV and the car, ultimately crushing the car and killing 5 nursing students who were riding in it. A $78 million settlement was eventually reached, but that did not prevent the state from filing criminal charges against both the driver and the trucking company. With the help of a truck accident lawyer, the plaintiffs were able to demonstrate during the wrongful death case that the driver had been fired by a prior employer for falling asleep on the job.

Trucking accident cases are often brought against large companies that have access to good lawyers. Juries, however, are proving to be increasingly sympathetic to those who’ve been hurt in incidents involving massive vehicles and incredible amounts of force. Companies are now regularly expected to take great care in terms of hiring drivers and maintaining the vehicles they put on the road. Even if the insurer is not interested in going to trial, having a truck accident attorney who has a history of going to court can generate pressure to settle a case in a fairer manner.

If you’re worried you might need the advice of a truck accident lawyer, Rebenack Aronow & Mascolo is ready to discuss your concerns in full detail. We maintain an office in New Brunswick, NJ, and we also have one in Somerville, NJ. Our practice is licensed to represent anyone who has been hurt in any type of trucking accident that took place in the state of New Jersey. Give our firm a call at (732) 247-3600, and our friendly office staff will help you set up a convenient time for a consultation with one of our professionals.