There are more than 500,000 commercial truck accidents annually in the United States. Approximately 20% of those incidents results in injuries and 1% in fatalities. In practically all cases, the accident results in one or more claims, and the time to receive compensation can range from months to even years.

Depending on the extent of your injuries, you may need medical care and physical therapy throughout the claim process and even beyond it. But we list it first in the timeline because most trucking accident lawyers agree that it is the first step you should take. Even if you feel fine in the moments after the accident, you should take the ambulance ride to a hospital to be examined by a doctor. This establishes a record of the medical attention you have received right away, which will make it easier to receive compensation later. Be mindful that it is not uncommon for a person injured in a truck accident to feel fine at first only to have symptoms from their injuries manifest later.

Once you are safe and any immediate medical attention required has been received, your next step should be to choose a local trucking accident lawyer to represent you. Your case is on the clock because the statute of limitations to file a personal injury lawsuit in New Jersey is 24 months from the date of the accident. Therefore, it is very important that your lawyer be able to file the claims as soon as possible in the event that an agreement cannot be reached, and your case has to go to trial. It is also notable that much of the evidence that your lawyer will want to collect becomes more difficult to acquire with time. Your lawyer may also need to draft and send spoliation letters. A spoliation letter is a document requesting that a party preserve all evidence related to the truck accident.

In accidents involving two passenger vehicles, determining liability is often straightforward. This is rarely the case with commercial truck accidents. In fact, it is not uncommon for the truck driver not to be liable at all, and even if the driver is liable, there are often multiple parties that share in that liability. In a typical accident scenario, your lawyer would file a single claim with the insurance company of the driver who was at fault. In a case involving a commercial truck, your lawyer may have to file multiple claims with different insurance companies. Potential liable parties include:

The investigation phase on your side begins with the determining liability phase but often continues beyond it. In fact, a good lawyer will continue to investigate your case even after claims have been filed. Any additional evidence acquired may help you reach a settlement faster, and all of the evidence available will be invaluable should your lawyer need to file a lawsuit on your behalf. Evidence that is common in such accidents include: 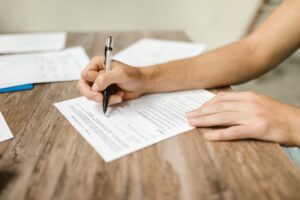 In New Jersey, you have two years from the date of the accident to file a claim. Your lawyer will want to file much sooner than that in order to have as much time as possible to file a lawsuit if necessary. Most claims are filed within a month of the accident occurring, and it is not usual for it to take longer than 90 days to file all claims. Of course, this depends on the scope and complexity of the case, and it is not unheard of for a liable party to be discovered later in the process, such as the manufacturer of a defective part.

Investigating Your Claims by Third Parties

Less than 10% of all truck accident cases go to trial. That means that more than 90% of cases are settled within 42 months and most much sooner than that. When your lawyer files your claims, they will request specific damages. In most cases, the insurance company will counter, and negotiations will begin. The size of the potential compensation often determines how arduous the settlement process will be. Smaller claims are often settled within several months. Negotiations involving large compensation can go up right until the lawsuit deadline and even beyond the lawsuit having been filed.

If your lawyer cannot reach a settlement within an adequate period, they will file a lawsuit or multiple lawsuits on your behalf. Note that your lawyer may not wait until near the end of the two-year period to file. If your lawyer has the sense that the two parties are just too far apart to reach a deal or that the other party is not acting in good faith, they may opt to file much sooner.

Once a lawsuit has been filed, you enter what is known as the pretrial or discovery phase. These are proceedings overseen by the court that involve depositions and exchanges of evidence. Negotiations are usually ongoing during this phase, and the vast majority of cases that go to trial conclude here at some point during the pretrial phase.

If a settlement cannot be reached during the pretrial phase, you will generally go to trial within 12-18 months of the lawsuit having been filed. Your lawyer and the opposing lawyer will both make a case before a jury and judge, and that jury will determine how much compensation you should receive.

Truckers are integral to the American way of life, and the vast majority of them are highly skilled professionals who will never be involved in a collision. But accidents do happen because a driver made a mistake or there was an issue with the truck or its cargo. If you or a loved one has been involved in an accident with a commercial truck, it is important to seek representation as soon as possible in order to ensure that your rights are protected. At RAM Law, we have extensive experience pursuing truck accident claims, negotiating settlements and going to trial. We have offices in New Brunswick and Somerville, and you can set up a consultation with one of our trucking accident lawyers by calling us at (732) 394-1549 or by contacting us online.